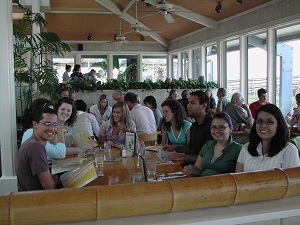 This project and lab are funded by a NSF CAREER Award Project awarded in 2006. You can read the project description on the NSF website or here. The project will be collecting data from 2006-2011 on how 20 different causes are being pursued online through education and protest.

Major goals of the project include understanding how formal organizations like ACLU or National Organization of Women use the Web for social change compared to individuals or less formalized groups and understanding the distribution of online protest actions available across time.

Click here for more information on recent publications from this project, or check out my c.v. online. 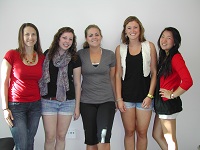 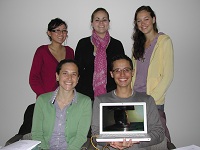 2009-2010 Lab Managers: Ashley, Andrea, Greg, Heather, Jayson, Maggie-- Jayson is shown on the computer screen via video link, although its hard to see that! 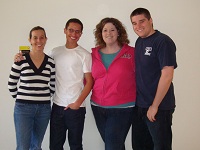 Ashley graduated from UCSB with a Business Economics major and minor in statistics in 2010. She is currently in the Masters program in Economics at UCSB. She joined the project in Fall 2008 and will earn her MA in 2011.

Ashley is a Comm Major, Music Minor graduating early in the Fall. She is interested in going to USC for grad school in occupational therapy. She joined the project as a sophmore in Fall 2009.

Sandy joined the project as a Sophmore in 2010. She is a Global Studies Major and is interested in going to law school to study International Law.

Heather McKee Hurwitz Heather is a PhD student in the Department of Sociology with Doctoral Emphasis in Feminist Studies. She has worked on the project since May 2009. Her research interests are in gender/feminist studies, social movements, and global studies. In addition to the lab, she is working on research about global women's movements, Muslim Arab American femininity, sexuality, and women's rights, social movements in the Philippines, and women's activism online.

Jayson joined the project in Fall 2008 as a senior. He has been a graduate student in Sociology at Washington State University since graduation but is transfering to the UC Irvine Sociology program in Fall 2011.

Michaela joined the project in the Fall of 2009 and is a English major. She will be graduating a year early this June and then working for a year and applying to law school.

Forrest joined the project in 2010.

Matthew is a Senior majoring in Political Science (International Relations Emphasis) and Spanish Language and Literature while minoring in History. After graduating he hopes to study public policy further and work for the government in some capacity.

Giulia is a sophomore that joined the project in Fall 2010. She is a Language, Culture and Society major, double-minoring in Spanish and Music.

Kathryn is a Spanish and Sociology major and Applied Psychology Minor. She will graduate in Spring 2011 and will be attending Sacramento State University in Fall 2011 in the MS Counseling Program, where she will specialize in school counseling. She hopes to become a high school counselor.

Carly is a global and international studies and Spanish double major that will be graduating in 2012. She joined the project in 2010.

Lauren joined the project in 2009 and will graduate this year.

Zelda is a junior who joined the project in Fall 2010. She is a double major in Global Studies and Spanish, and will be studying abroad in Chile in June.

Jennifer was a Sociology Major and Latin American Studies/Women, Culture and Development double minor. She graduated in June 2009. She joined the project Spring 2009 and enjoyed working on the special collection.

Rachel joined the project in September 2006 and worked as lab manager during the Winter and Spring quarters. She double-majored in Sociology and Women's Studies and graduated in Spring 2007. Once she recovered from the heartbreak of no longer coding tactics, she planned to spend every last dime traveling the world.

Andrea was a sociology and political science major who graduated in June 2010. She joined the project in Spring of 2009. She is currently finishing a year in Teach for America.

Jackie worked in the lab during the 2006-2007 school year and added a lot of humor to the lab.

Cari worked in Earl Lab for the 2006-2007 school year. She graduated from UCSB with a degree in Sociology and a minor in Applied Psychology and is hoping to become a school counselor.

Carly worked in the lab for course credit during the 2006-2007 school year.

Katrina was a senior graduate student who worked with Jenn on the entire project. She was the lead lab manager until 2009, when she completed her PhD. Her dissertation analyzes the same-sex marriages performed in San Francisco in 2004 using a social movement, sociology of gender, and cultural sociology approach.

Michelle Kitson was a Sociology major with a minor in SocioCultural Linguistics. She graduated in June 2008, having joined the project in Fall 2007.

Karina began work on the project September 2007. She was a double majoring in Political Science and Sociology and wrote an honors thesis on clientelism in the Chavez adminstration during her senior year.

Tritia worked as a research assistant for Jenn during the 2006-2007 school year, and joined in on her NSF project during Winter 2006 and Spring 2007. She graduated in 2007 with a BA in Sociology and hoped to (eventually) go to grad. school to become a certified School Psychologist.

Ana joined the project as a senior in the 2009-2010 academic year. She is heading to graduate school at UC Irvine in Fall 2011.

Sarah Miers was a double major in Spanish and Global and International Studies. She worked in the 2008-2009 year and graduated in June 2009. She enjoyed learning more about sociological research techniques and working in a diverse team of both graduate and undergraduate students.

Emily worked on the prokect during her junior year. She was a sociology major, minoring in education. She graduated in 2009.

Brad worked in the Earl Lab in 2006-2007 and graduated in 2007. He majored in Sociology. After graduation, he planned to work with at-risk youth programs.

Kimberly worked in lab from 2006-2008. She was a double major in Sociology and French and graduated in 2008. After graduation, she was a Peace Corps member for a year.

Carly started working in lab in the Fall of 2006 has had a great time learning about the research experience along side wonderful people! She graduated from UCSB with her degree in Sociology in the Winter of 2008 and is happy to have remained on the project post graduation until June 2009! She is currently a PhD student in Sociology at Vanderbilt University.

Alyssa was a senior sociology major in 2007-2008 when she worked on the project. She also wrote a senior thesis that year.

RJ joined the project in Sept. of 2007. She was a sociology major graduating with the class of 08'. Along with working on the NSF project, RJ completed her honors thesis.

Christel worked on the project as a junior, majoring in sociology and minoring in global peace and security.

Not pictured, but a lab alum nonetheless:
Rebecca Levy: Rebecca was a UCSB Art and Sociology major and worked in the lab during the 2006-2007 school year and the Summer of 2007. Her passions include the study of deviance and the fine art of photography. She says, “Working on this research project has been an extraordinary learning experience and I look forward to continuing in the future.”